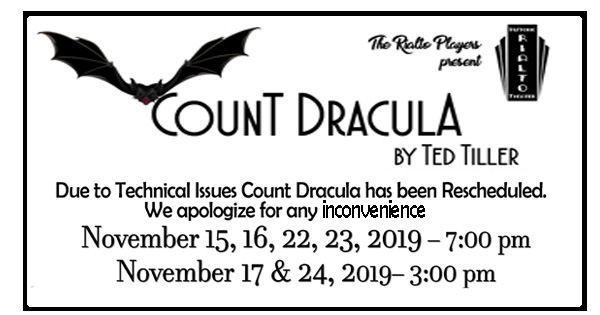 WHAT: The Rialto Players presents Count Dracula written by Ted Tiller. “Count Dracula” is presented by special arrangement with Samuel French, Inc., a Concord Theatricals Company. The production is directed by RC Wilkins.

Tiller breaks from tradition in the character of Sybil Seward. The doctor’s sister frequently breaks the tension with her dotty pronouncements, inducing laughs as well as shivers.

But even Sybil’s silly sayings can’t erase the horror when Dracula is ultimately unmasked.

You may reserve tickets below and pay/pick them up at the box office.