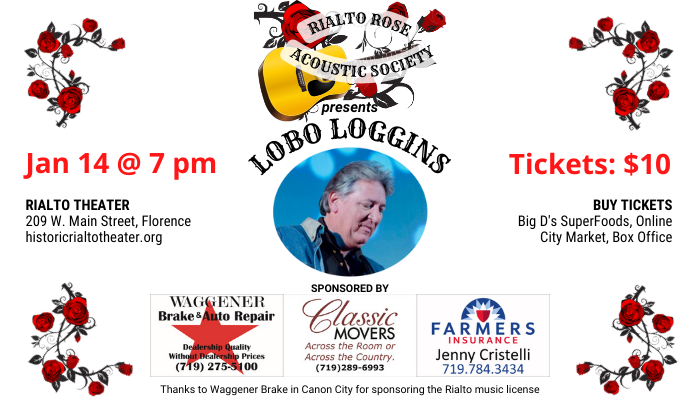 The Rialto Rose Acoustic Society will be featuring a monthly concert on the second Saturday of the month.

Lobo Loggins will be our first-ever performer in this new concert series. Lobo Loggins is well-known in the Fremont County music community. He will be performing all original songs for this event.

Tickets are $10 and may be purchased at the box office on the day of the event. Online tickets will include a $1 transaction fee per ticket.

Lobo Loggins has an extensive background in all types of music. Having been signed with Step One Records in Nashville as a recording artist and song writer in the early 90’s, he found himself on the brink of stardom with a top 40 Hit: Ain’t No Cows in Texas. You may remember Lobo’s video aired on TNN and CMT.
As a guitarist, Lobo has mastered the Texas Style Blues and played lead guitar for blues legend Katie Webster and worked on stage with Percy Sledge, Clarence “Gatemouth” Brown and Buddy Whittington.
As a Country artist Lobo worked for years with George Jones and shared the stage with country legends Merle Haggard, Loretta Lynn, Randy Travis, Willie Nelson, Waylon Jennings, Conway Twitty, Tanya Tucker, Johnny Paycheck and many others.
As a song writer Lobo co-wrote “Love Me Down to Size” which was recorded by Country Music Hall of Famer, Ray Price. He also co-wrote, I Ain’t Fool Enough To Fool Around which was featured on Larry Boone’s Swinging Doors and Saw Dust Floors album.
Lobo still has ties to, and writes with, Award winning song writers in Nashville. Writing, playing, entertaining, and singing is what Lobo does best.