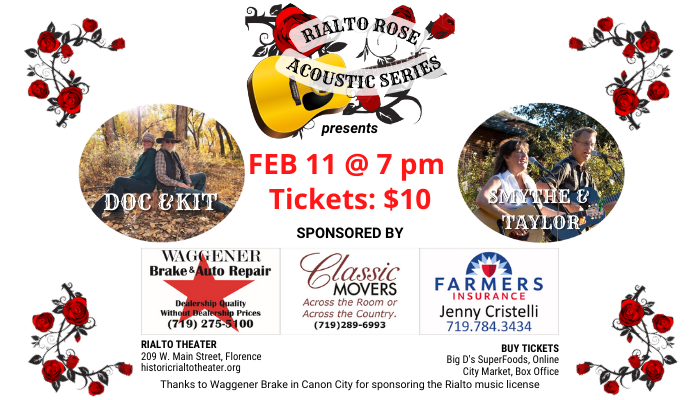 The Rialto Rose Acoustic Series features a monthly concert on the second Saturday of the month.

Tickets are $10 and may be purchased at Big D’s in Florence, City Market in Canon City, online, and at the box office on the day of the event. Online tickets will include a $1 transaction fee per ticket.

Smythe & Taylor formed in 1999 when a friend asked TC if she could sub for him at a coffee shop gig. She only knew a handful of songs, but there was $85 to be had! A co-worker suggested she go up to the 28th floor of the office building where she worked to find a fellow named Gary Taylor. It was rumored that he knew how to play over 1000 songs!

After getting acquainted, they scheduled a rehearsal to prepare for the one-off gig at Diedrich’s Coffee in the Montrose area of Houston. 22 years, 11 recordings, and 10 European tours later, ‘S&T’ have become well known for their songwriting and symbiotic harmonies. After Gary won the Woody Guthrie Songwriting Award, S&T were nominated in 5 categories of the Texas Music Awards. They won the “Popular Cover” and “Vocal Group of the Year” awards.

Since 2009, S&T have co-hosted the High Peaks Music Festival in Westcliffe, Colorado, and have enjoyed a standing invitation to bookend the Sweet Home Fest in Guildford, England since 2017. S&T have played hundreds of venues from San Francisco to New York and Toronto, from London to The Hague, Ireland, and Warsaw and Mragowa, Poland.
www.SmytheAndTaylor.com