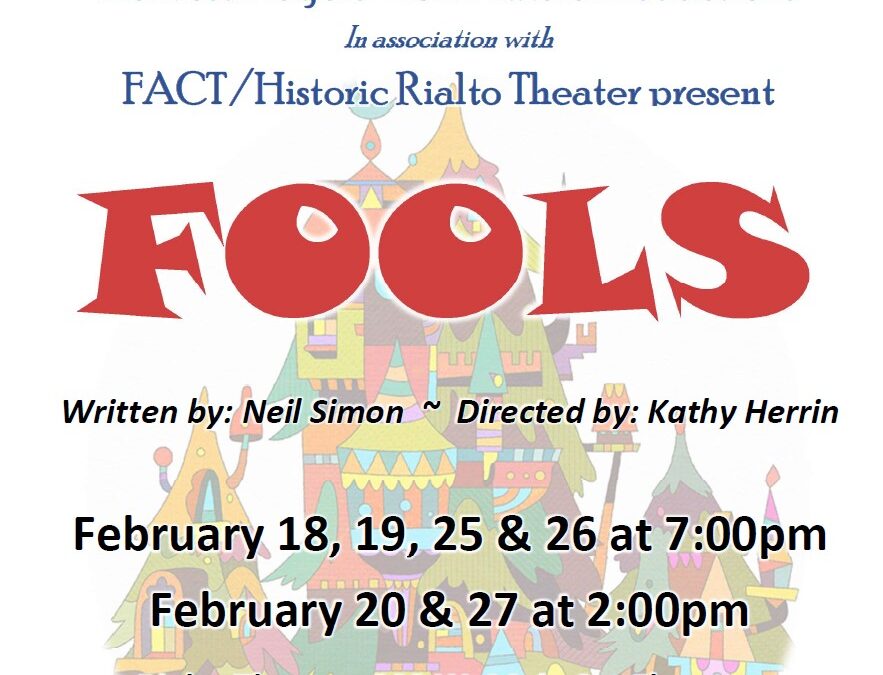 Synopsis:
Written by Neil Simon, “Fools” is not in his usual genre, BUT this fun comedy is definitely filled with the enjoyable wit and insight of the famous playwright. “Fools” is set in a Russian/Ukrainian village around 1890. The village has been cursed with stupidity and it is up to our hero, Leon Tolchinsky, to try to break the curse in 24 hours! He certainly faces a daunting task when dealing with a villainous Count, a young woman who just recently learned to sit and a shepherd who keeps losing his flock. Audiences are sure to enjoy the delightful villagers and their antics as they strive for enlightenment.

This was an amazingly funny production. The cast and set were amazing. The performances were filled to capacity and sold out for several of the performances. The dancing sheep were hilarious. And in the end, the curse was broken and the hero got the girl (sigh).

A Big Thanks To:

A NOTE FROM THE DIRECTOR

Greetings! And welcome to the humble village of Kulyenchikov! We are so excited to once again bring this fun Neil Simon show to the stage. As you will see, there have been some actor/actress changes and we have dived in deeper to bring new dimensions to the characters. I would like to extend my sincere appreciation to the Historic Rialto Theater/FACT Board, as well as our partnership with Harvest Players – On a Role Productions. Once again, I have been blessed to have one of the best ensemble casts ever! My thanks to each and every one of the cast, crew members, and their families.

In 2020, I viewed this show as one of determination, strength, hope and enlightenment. However this time, the cast and I have realized it is truly a message of LOVE! My heart’s desire is that this production and all I do would glorify God, whose precious love shines through His Son, Jesus Christ!

Enjoy our show and all the antics of our “Fools”!