Group Pushes Forward With New Board 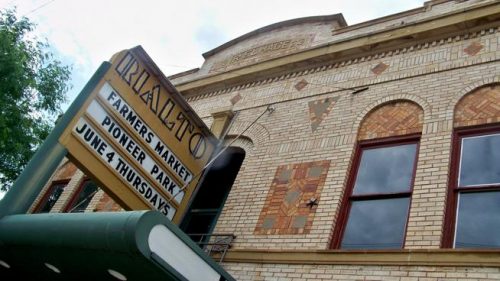 The outside of the Rialto Theater at 209 W. Main St. in Florence on Friday. By Carie Canterbury / Daily Record

FLORENCE — It’s the beginning of Act 3, Scene 1 for Florence’s historic Rialto Theater. The curtain has risen and nearly all the players are in position to jumpstart the theater’s renovation so it once again may offer live theater, music, dancing and even first-run movies.

The nonprofit Florence Architectural and Cultural Traditions Board owns the theater that was built as an opera house in 1923 by Richard Elhagein.

Since the 1990s, about $1.3 million has been put back into the building. Under the direction of the past project directors Paul St. Paul and later Suzanne Phipps in 2003, the roof was replaced;rooftop coolers and heaters, a new sprinkler system and two water systems were added; sewer, electric, insulation have been completed; a spiral staircase and additional restrooms were installed; and wooden beams have been reinforced with steel. The cost to complete the rest of the work, and a timeline, is uncertain until a historic structure assessment is completed. The board is applying for a grant to cover the cost of that assessment.

After a previously undiagnosed autoimmune disease, Phipps died in December 2014. Most of the FACT board members asked to be excused from the board after her death, but Richard Baker, board president and manager of the Fremont County Airport, remained on board and recruited other local individuals to help move the vision forward. They began meeting in February.

Baker wants the community to know all meetings are open to the public, and the board actively is seeking volunteers and advisors.

“(The Rialto) is a big asset for the City of Florence,” he said.

It is important to the board to pick up momentum with the project and to work diligently to be able to have the Rialto up and running in the next few years.

“This honors all the past contributors, and it will be an economic stimulus for all of Fremont County,” said Donna Murphy, board treasurer.

Wade Broadhead, Florence planning director and advisor to the FACT Board, said having the Rialto open will help downtown businesses, such as restaurants.

“We are doing really well during the daytime here, but the nighttime is still struggling a little bit,” he said. “This could help bring those people here during the evening.”

Florence City Councilman and FACT board member Larry Baker recently visited the Grand Theater of Rocky Ford, and managers there are willing to share advice and information as the Rialto project moves forward.

“I was amazed with the equipment they have and what they can do,” he said. “It’s unreal.”

He said Rocky Ford only has about 200 more people than Florence, and its theater is operating successfully. About 500 people recently attended a live performance and movies are offered on the weekends.

The board currently is compiling a list of past contributors so they can be recognized, brought up to date on the project and invited back to the effort.

Holcim has been instrumental in contributing funding, manpower and supplies and equipment for the renovation project. Holcim in recent years has stabilized the structural beams of the stage, extended the stage and did the drywall and insulation work of the stage’s interior. They also laid a new sidewalk in front of the Rialto.

Larry Baker is working with a crew to improve the downspout behind the building, and other board members are working with the city to turn on water and check for leaks. The board also is in the process of purchasing insurance so fundraising events and board meetings can be held on the premises.

In addition to raising funds and seeking grants, one of the first items of business for the board is to remove all of the items that were part of a second-hand, antique store operated in the storefront of the Rialto by Phipps to generate funds for the renovation. A live auction to benefit the renovation effort is set for July 18 at the theater, 209 W. Main St. There will be collectibles, tables, dishes, records, lamps and more. More information will be released at a later date. Businesses and individuals wishing to contribute items for the live auction may call Broadhead at (719) 784-4848 or (719) 371-5914, or email wade@florencecolorado.org.