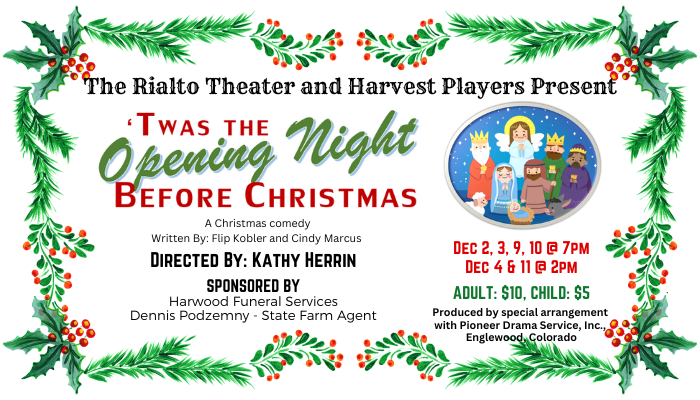 The Rialto Theater and The Harvest Players Presented

“Twas the Opening Night Before Christmas”

There were 6 performances on Dec 2 – Dec 11, 2022 at the Rialto. We had such amazing crowds for many of the performances, and the final matinee performance was Sold-Out!

It’s Christmas Eve at the church and the pageant must go on in one hour. Even as parishioners are lining up at the door, the players aren’t prepared, the producer’s big plans are over budget, the directors are engaged in a power struggle, the chorus keeps clucking away, and all the while the pastor’s hopes to raise funds to help the homeless hang on a wing and a prayer.

At a time when holiday spirits are meant to shine like the star of Bethlehem, the pageant cast and crew are showing as much kindness and composure as the angry, off-stage donkey being provoked by an incompetent — and overpaid — wannabe animal handler. Will the show fly in time? Or will it be left grounded like the wingless angel who wants only to reach for the stars?

Just when it seems like peace on Earth and goodwill is way, far away in another manger, the wise words of the worried pastor — and maybe just a hint of divine intervention — help set things straight in this absurd one-act chock-full of stage humor and lessons about what happens when we forget the true reason for the season.

We are so pleased you have joined us for our Christmas show! This is such a special time of the year and we hope you find this performance not only enjoyable, but a reminder of the true meaning of the Season. We know things can get hectic and we sometimes have to deal with “interesting” folks. However, when we take a moment to reflect on celebrating the birth of our Savior, all the chaos seems to melt away – leaving us with the message of the love and light of Jesus! I am very thankful to each and every cast and crew member – some of whom I’ve had the pleasure of working with before and others who are brand new to community theatre. I also appreciate the Historic Rialto Theater Board, Ray and Kaye Linebaugh with Harvest Players, our sponsor and advertisers and, of course, YOU – our faithful live theatre patrons! I pray you are truly blessed this Yuletide and that your relationship with Christ grows deeper.
– Kathy Herrin

Cast In Order of Appearance 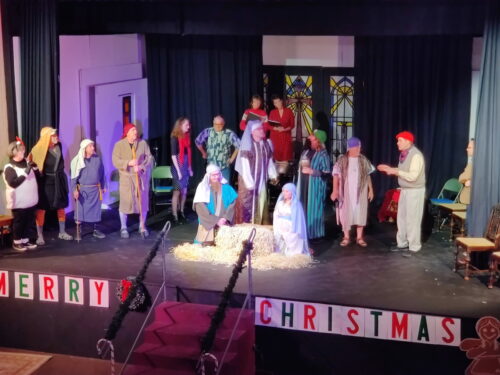 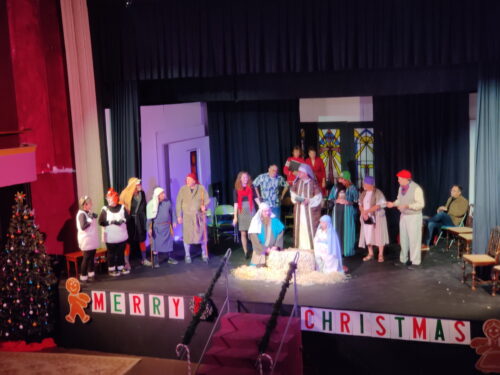 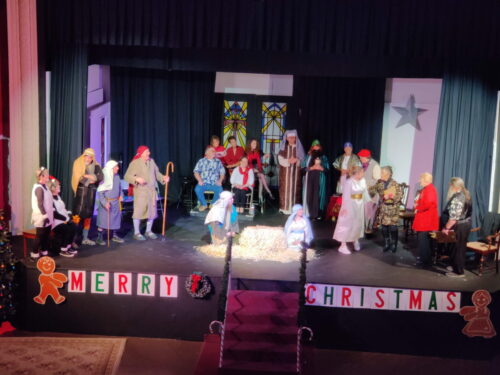